Wild Futures primate conservation and welfare charity recently expressed their delight and gratitude when Cross Country Trains pulled an ad in response to objections by the charity and their supporters.

Cross Country’s recent promotion for NUS students featured a chimpanzee and suggested on ‘Step Number 4’ that students ‘Buy a Monkey’ with the saved money. Wild Futures contacted Cross Country Trains asking them to drop their advert, explaining that it was irresponsible to feature a chimpanzee dressed in clothing and potentially very damaging to encourage people to buy a pet monkey.

Celebrities, campaigns and brands, such as Cross Country Trains, are designed to directly influence their target audience. Dressing primates up for entertainment purposes reinforces and promotes the idea that primates can live happily alongside humans, which  sets back the work of organisation such as Wild Futures who have been trying to change this practice for years.  Wild Futures operates a sanctuary for rescued ex-pet monkeys in Cornwall and has first-hand experience of the suffering caused by the trade in primates as pets.  The centre rescues and rehabilitates monkeys in need, allowing them to socialise with their own kind in a safe home for life. Wild Futures campaigns to see an end to the primate pet trade in the UK and abroad.

The charity have said that they welcome Cross Country’s decision and are encouraging the advert agency to sign the Animal Pledge at www.AnimalPledge.org 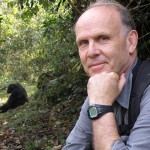 "Ethical treatment of primates in captivity is a vital component of ensuring a future for primates in the wild. If we care for primates as individuals, we can care for them as species. Congratulations to Wild Futures for showing us the way."