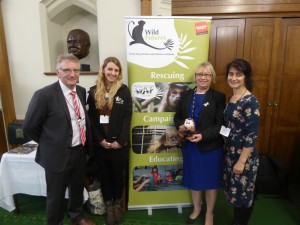 Wild Futures, a leading primate welfare charity, travelled to the Houses of Parliament in London on Tuesday 21st of February to attend a very important reception promoting a ban on the UK primate pet trade.

The event was hosted by MP Sheryll Murray and was headed by the RSPCA along with Wild Futures, Born Free Foundation, Four Paws, Captive Animals’ Protection Society, and British Veterinary Association. It provided an important opportunity for MPs to come and speak directly to primate welfare experts and pledge to support a ban on the private ownership of primates.

Renowned conservationist and field biologist Ian Redmond,OBE, who is known for his work with Great Apes, also attended the reception and was eager to talk to MPs about the need to ban the primate pet trade.

“With 30 MPs in attendance the event was a great success.” said Sarah Hanson, Campaigns Officer at Wild Futures, “It was an important opportunity to talk face to face with MPs and really highlight the plight of primates in the trade. I had the chance to show evidence of some of the physical and behavioural disorders that all of the rescued primates suffer with at The Monkey Sanctuary. MPs commented that it was really eye opening and agreed that they would pledge to support a ban.”

Every delay in ending the trading and keeping of primates as pets simply prolongs the suffering of individuals kept in unsuitable environments. A public opinion poll shows that there is overwhelming support for an end to this cruel trade and a petition has currently attracted almost 42,000 signatures and is rising. Fifteen other EU countries have already addressed the problem. The UK needs to catch up!

The petition can be found here: www.protectprimates.org 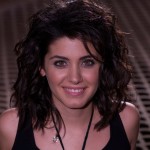